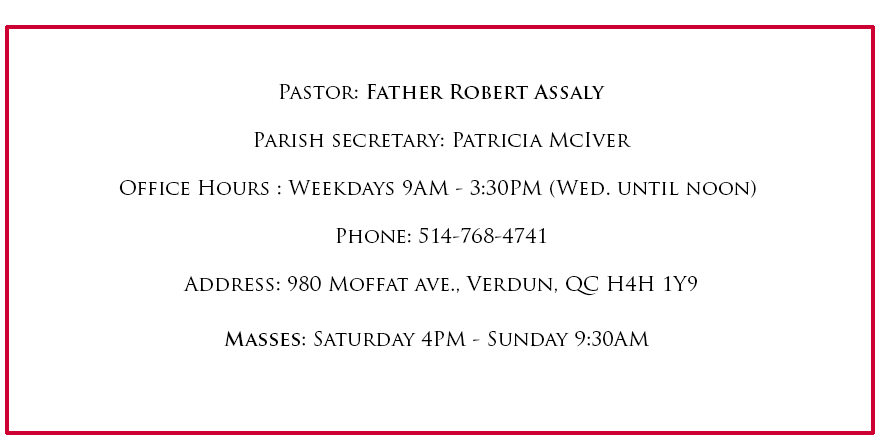 Give a moment for the dead and grieving in Nova Scotia, tomorrow...

Let us meaningfully say, "Our prayers are with you," to the people of Nova Scotia and all who grieve the weekend massacre. This is not cliché, rather as mentioned in yesterday’s Soul Health V email, tomorrow (Friday) the Mass of the Dead will be offered for the deceased and all affected.

3. A Reflection, in lieu of a homily

4. The Prayers and Readings

The mass will be offered at 1pm, ending at 1:30. You are invited during that time, or anytime during the day to do any or all of the following: light a candle, observe some silence, read the prayers below and the regular mass prayers to yourself, read the Reflection, and pray. You can also be in full communion by making a Spiritual Communion (as any day), with all other Catholics doing the same tomorrow.

Pope Francis has reminded us that we are in communion just as if we have received the sacrament itself when we:

a. express our desire to be in communion, and

b. confess our belief that the Sacrament is the true Body of Christ in which He is really present, and

c. resolve and follow through to receive the consecrated host as soon as it is possible

We cannot help but feel broken-hearted for the horror that last weekend unfolded in our country, seemingly next door in Nova Scotia. 22 innocents slaughtered – a female RCMP officer defending us, a pregnant health care worker overworking during the pandemic, and 20 other parents, children, relatives, friends and colleagues. And in tight-knit serene communities. A week ago, it was unimaginable.

But evil, the evil of just one deranged soul, gruesomely committed this country’s worst slaughter.

How to respond? What to do?

First, I was on a videoconference yesterday (Thursday) on the topic parish ministry during the pandemic, led by Fr. James Mallon from Halifax. He began by expressing his and Nova Scotians appreciation for our concern. He also observed, “It’s so disturbing to see on the international news small towns in your own small province mentioned because of an unspeakable evil.” In our backyard it seems.

And it may seem that unspeakable evil may have won. Not so. Not so.

Even the apostles, except St. John fled from the cross, fearing evil had defeated their master, Jesus. All the more were they surprised by Easter, His rising from the dead three days later -- His conquest and utter defeat of evil and its ultimate achievement, death.

Only then did they understand that the previous Friday was a sacrifice, and the night before at Supper, when he had said, “This is my Body” and “my Blood” which tomorrow will be given up for you, that he was inviting them to share in that sacrifice of self-giving love.

And thus, St. Paul, who 4 years later on his way to persecute Christians was confronted by the Risen Christ on the road to Damascus, later wrote to the Church in Rome which he hadn’t yet visited, as in today’s reading, “For I am persuaded that neither death” -- yes, death -- “neither death, nor life, nor angels, nor principalities, nor things present, nor things to come, nor powers, nor height, nor depth, nor anything else in all creation, will be able to separate us from the love of God in Christ Jesus our Lord.”

St. Paul was so persuaded that he joined his life to Christ’s as a loving sacrifice, going to Rome in chains to his own death by beheading.

At the beginning of his Gospel, St. John retrospectively writes of the coming of Christ, “The light shines in the darkness, and the darkness has not overcome it.”

What can we do? By joining in today’s Holy Sacrifice of the Mass, offering your sacrifice of prayer and thanksgiving, you participate in the light, indeed sharing in the communion of the The Light, Jesus Christ, God. You share in that light that darkness cannot overcome, that defeats evil, and death, proclaiming instead the victory of life in Christ. And you share in bringing hope of eternal life to all the deceased, and the hope wrought of solidarity to all who grieve. Amen.

4. The Prayers and Readings

The Collect (the prayer just after the confession of sin at the beginning):

Almighty God and Father, it is our certain faith that your Son, who died on the Cross, was raised from the dead, the first-fruits of all who have fallen asleep. Grant that through this mystery your servants, who have gone to their rest in Christ, may share in the joy of his resurrection. We ask this through our Lord Jesus Christ, your Son, who lives and reigns with you and the Holy Spirit, one God, for ever and ever.

Readings (in your bible or easily found on the internet)

Prayer of the Faithful

Let us in faith call upon God the almighty Father, who raised Christ his Son from the dead, as we pray for the salvation of the living and the dead:

That God may establish the Christian people in faith and unity, let us pray to the Lord.

That He may rescue the entire world from all the evils of war and violence, and comfort with His unfailing grace and love the friends and families of the deceased for whom we pray, the people of Nova Scotia, all who grieve with them, let us pray…

That He may be pleased to show Himself a father to our brothers and sisters who lack work, food or housing, and who are fearful or anxious because of the pandemic, let us pray …

That He may be pleased to admit for ever to the company of the Saints his deceased servants slaughtered in Nova Scotia, who once through Baptism received the seed of eternal life, let us pray…

That on the last day he may raise up all slaughtered in Nova Scotia, that with us they may share in Heavenly Banquet on the Body of Christ, the Bread of eternal life, let us pray…

May the prayer of those who cry to you benefit the souls of your servants, O Lord: free them, we pray, from all their sins and make them sharers in your redemption. Through Christ our Lord.

Prayer Over The Offerings

As we humbly present to you these sacrificial offerings, O Lord, for the salvation of your servants we beseech your mercy, that they, who did not doubt your Son to be a loving Saviour, may find in him a merciful Judge. Who lives and reigns for ever and ever.

Preface for the Dead (after Sursum Corda/Lift up your hearts…)

It is truly right and just,
our duty and our salvation,
always and everywhere to give you thanks,
Lord, holy Father, almighty and eternal God,
through Christ our Lord.

In him the hope of blessed resurrection has dawned,
that those saddened by the certainty of dying
might be consoled by the promise of immortality to come.
Indeed for your faithful, Lord,
life is changed not ended,
and, when this earthly dwelling turns to dust,
an eternal dwelling is made ready for them in heaven.

And so, with Angels and Archangels,
with Thrones and Dominions,
and with all the hosts and Powers of heaven,
we sing the hymn of your glory,
as without end we acclaim:

Eucharistic Prayer III will follow, and where normally it is said, “To our departed brothers and sisters…”, this will be replaced with the section beginning, “† Remember your servant (then name each of the deceased)…”

Lord God, whose Son left us, in the Sacrament of his Body, food for the journey, mercifully grant that, strengthened by it, our brothers and sisters may come to the eternal table of Christ. Who lives and reigns for ever and ever.